Days like yesterday are really hard to assess. There are the incredibly joyful parts that just make you so, so happy - and then there are the few bits and pieces (as it happens often allocated at the end of the day just to make themselves more prominent in your memory) that are completely exhausting.  Like having the children throw up on the table just because you tried to get them to eat KNOWN and (previously) approved of vegetables.

They make you want to crawl underneath the covers in your bed and stay there for the rest of the year. Yes, that bad.
But if you manage to focus on the great parts, they can make your day. Like laughing so hard you can't breathe at another one of the ridiculous jokes of your friends. Or having the kids on your lap telling you how much they love you.
Or, for example, finally being able to realise a project you had wanted to do for forever. Like this one! 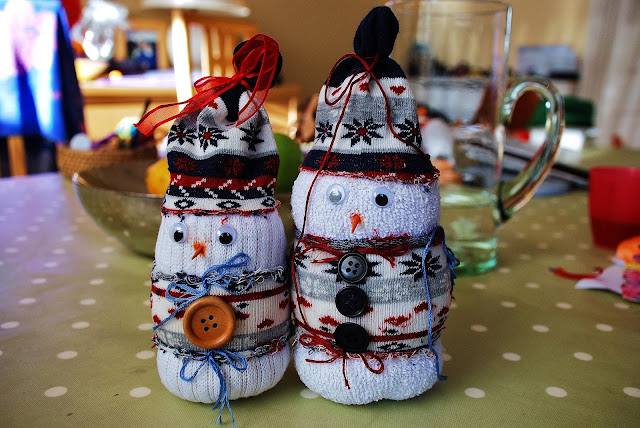 I hope it's not still socially unacceptable to admit you're already in your Christmas mood because I clearly caught the fever early this year. Soon after Halloween I started thinking about presents!
I can't wait till all our dearly missed (at least as long as it takes us to realize that there are reasons for not visiting that often) family members arrive, turn the house into an overcrowded place bustling with activity and fill it with the mouth-watering smells of that nights dinner.


Well, taking all that into consideration, I find it quite surprising that I have only just finished my first piece of Christmas decorations and haven't gone up into the hundreds already...
Anyways, these little Snowmen are the easiest project you can imagine and are finished in about 15 minutes. If you're feeling ambitious and have some special decorating ideas to pimp up their hats or clothes it might take you a bit longer, but still... You get the point, don't you?
The only things you need are


1) a white sock (preferably knee-high, but you can take anything you can find. As we couldn't find knee-socks we just made do with smaller ones. It's really just a matter of how tall you want your snowmen to be!)
2) patterned socks (either a pair of ankle-socks or a single higher one per snowman)
3) stuffing. Rice, oats, beans - raid your kitchen cupboards!
4) rubber bands (2 per snowman)
5) decorating material like yarn, buttons, shish kebab skewers (for the nose) etc.


It's easy - cut your white sock into the foot part, including the heel, and the calf part, which you will use.

Secure one end of it with a rubber band, turn it inside out and stuff it with whatever material you were able to dig up. Depending on how chubby you want your snowman to be stuff it lightly (slim figure) or make sure you press and squeeze to pack it quite tightly for a chubbier one. 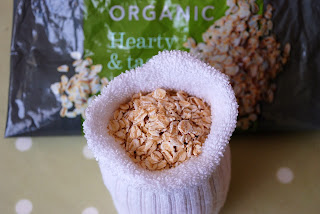 Secure the other end with a rubber band. Cut a part of the patterned socks off for the clothing, leaving the toe part for the hat. Tie it around the snowman with yarn, ribbon or whatever other thing your creative mind can come up with!


Because the fabric of my patterned socks was quite likely to roll itself upwards, I glued the hat onto the white sock, but of that's not the case I suppose just putting it onto the top end without securing it should work just fine.

Last, but definitely not least: decorate to your liking! I used buttons for the eyes and the... well, buttons, and the tip of a shish kebab skewer painted in orange as a nose. I just glued everything on for efficiency, but if you’re feeling perfectionist, then sewing them on would also be an option.
Et voilà!